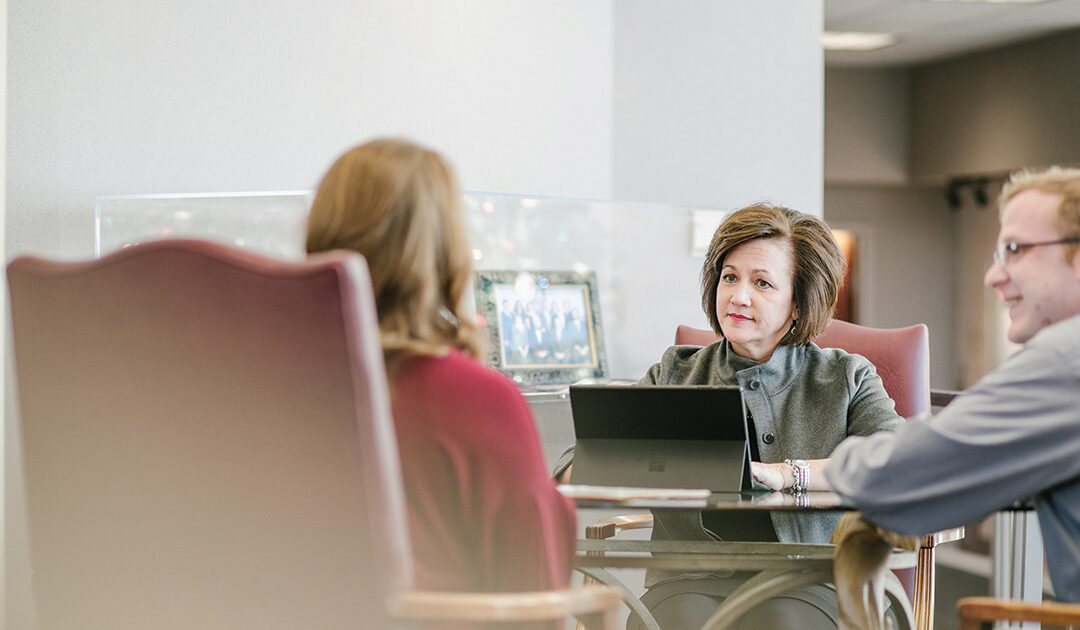 Mary Beth Brooks had been president and CEO of Bank of Fayetteville for 11 years when the bank was sold in November 2015 to Stuttgart-based Farmers and Merchants Bank. Brooks resigned following the sale to take a break and care for family members after a 30-year banking career.

She also began doing consulting work to determine the next step in her career, knowing she wanted to start something new.

In spring 2018, Brooks met with Stacy Leeds, who was interim vice chancellor for economic development at the University of Arkansas. Leeds was reaching out to people to seek guidance on her new role in the newly created Office of Economic Development. Leeds, former dean of the UA School of Law, was appointed in July to vice chancellor for economic development, and the next month, Brooks became director for the UA Small Business and Technology Development Center after she said Leeds convinced her to accept the position.

“I think she could see the energy that was coming together at the university around this type of work and knew that she would get to be a part of building something new and also building on our existing strengths,” Leeds said. “The new challenge pitch is what I think did it for her.”

The center is one of several offices that Leeds oversees, including Entrepreneurship and Innovation, Industry Engagement and Corporate and Foundation Relations, the Sustainability Consortium, World Trade Center Arkansas, Arkansas Research and Technology Park, Technology Ventures and Tribal Governance and Economic Empowerment Consortium.

The center operating within this group of offices allows for greater partnership opportunities, Brooks and Leeds said. The Sam M. Walton College of Business previously provided oversight of the center, and since the center was reorganized July 1 under the Office of Economic Development, the college has continued to support the center at the Donald W. Reynolds Center for Enterprise Development, Leeds said.

The center is funded in part through grants from the U.S. Small Business Administration and the UA, and is one of more than 1,000 centers across the United States that helps startups get started and existing small businesses to grow. The UA center’s 2019 operating budget is $357,840, and it offers professional training seminars, free market research and business consulting services to existing and potential small-business owners.

Businesses that have received help from one of the seven centers in Arkansas increased sales by 13.2% and jobs by 14.8% more than the average Arkansas business, according to Arkansas Small Business and Technology Development Center. Across the state in 2018, the centers assisted 4,254 Arkansans, helped to obtain $82 million in capital and 116 business to start, and supported 6,034 jobs.

EXPANDING SERVICE OFFERINGS
Many of the conferences and seminars the center hosts are free, but some have a fee, usually no more than $40, Brooks said. Some of the events include training on building a website, exporting products and establishing a business. The one-on-one consulting and research are also offered as free services to clients. Brooks, who said she spends about 35% of her time out of the office working with clients, plans to host four to six events in cities and towns throughout the eight-county region in which the center operates, from Northwest Arkansas to the north-central part of the state.

The UA center has three full-time and several part-time staff working with 102 active clients, who are those staff have been working with over the past two or three months. The center has been operating at capacity, and recently hired a full-time employee. This year, the plan is to have graduate students help there as well. Brooks’ goal for 2019 is to reach 2,000 people through its events, consulting and research. Word of mouth is the most common way people find out about the center, and it receives referrals from bankers, businesses and chambers of commerce.

“It has been the place that people are naturally referred to,” Leeds said. “We don’t even need to generate new clients. There’s so many people who already know about the good work of the center that we have a backlog. But I think that what Mary Beth can do to take this to that next level is that we spend an incredible amount of time working with people who are at the beginning stages of their company, and what we would like to maximize on is working with those companies that have already been in existence that we might be the key to helping them grow to the next level.”

MAKING DREAMS REALITY
Brooks explained her position at the center was a great dovetail from her work as a community bank president.

“If you were to ask most bankers, I think that they would say, especially lenders, would say, ‘I’m helping people achieve their dream,’” Brooks said. “This is just in a different piece of that.”

She helps startups to develop financial and marketing plans and to prepare them before they present their plans to lenders or investors. She also provides clients with market research reports to help identify the target customer or show the best location for a business, based on demographics and traffic data. Brooks said she was working on a report for a florist that would have cost between $5,000 and $10,000 as the center has access to 14 to 15 databases. She helps clients to ensure that their dreams can become a reality and challenges their plans to make sure they’re realistic.

“We really play through scenarios to where they fully understand for those startups what they’re getting into,” she said. “We usually break it all the way down for them, and if it’s a restaurant, what kind of sales are you going to have to have every month.”

The center’s work with clients is confidential, but businesses can sign waivers for their names to be released for promotional purposes. Such businesses include Fayetteville-based grocer Ozark Natural Foods, pet shop Woof & Wander in Rogers and cheese store Sweet Freedom Creamery in Bentonville. The center also works with veterinarians, fitness clubs, dry cleaners, bike and body shops, drug stores and professors who have a product they’d like to sell. Brooks said the center cannot work with businesses with more than 500 employees.

“She knows the ins and outs, what’s going to work and what’s not going to work,” Brooks said. “I’m here to help for moral support, but that’s such a specific expertise type area. And she does so exceptionally well with it.”

The SBIR and SBTT programs have a combined annual budget of $3 billion for small businesses and their partners with ideas for innovative products and services, Todd said. This funding is non-dilutive, which means a business doesn’t have to relinquish any ownership or shares for it, and it doesn’t have to be repaid. State funding through the Arkansas Economic Development Commission also is available.

Over the past year, Todd has worked with 79 clients and has 20 active clients in Northwest Arkansas. Clients include startups and established companies from agriculture to life science and advanced materials. Since 2010, Todd has helped Northwest Arkansas clients receive $10.5 million in federal and state funding.