Purina Wants to Feed Your Dog Crickets and Fish Heads 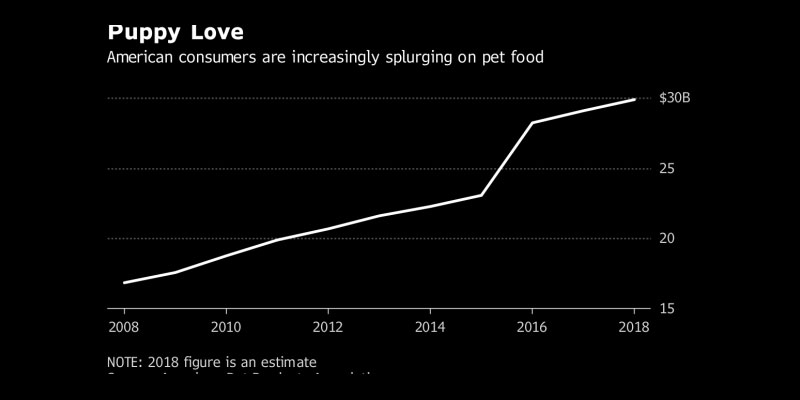 (Bloomberg) — Fill Rover’s bowl with crickets and Asian carp, and keep the grass-fed beef steaks for yourself — it’s better for the environment.

So says Nestle SA’s Purina, which is experimenting with a new line of pet food featuring untapped ingredients like insects and invasive fish species. The menu goes against the grain in the $90 billion business, whose growth has been driven by dog and cat owners serving up meals that increasingly resemble their own — including organic, grain-free, vegan and even “human-grade” options.

Those new-age recipes may sound more appetizing than traditional pet food, made up of all the bits and byproducts people didn’t eat that are ground up and pressed into morsels to disguise their provenance. There’s just one problem: The richer diets take a higher toll on the planet, too, conflicting with the food industry’s push for sustainability.

“For us, the question is: how do we make sure we can continue feeding our pets?” said Chris O’Neil, senior brand manager at Nestle Purina.

In a test launched in October in the Chicago area, a Purina startup called RootLab is selling pet food with new proteins like crickets and Asian carp, which threaten to overrun native fisheries in nearby Lake Michigan.

RootLab also gives common pet-food proteins like chicken organs a fresh, sustainable spin. In an effort to build consumer acceptance for unpalatable-sounding ingredients whose nutritional benefits the company says have gone unrecognized, it lists them on the front of the bag instead of hiding them in the fine print.

“There’s an opportunity to change perceptions and re-educate what premium means,” said Martin Guerrieria, a director at market research firm Kantar Millward Brown. “Premium can mean what’s best for your pet — and what’s best for the environment.”

As consumers lose their taste for packaged foods, cats and dogs are a bright spot. Chief Executive Officer Mark Schneider has singled out pet food as a driver of growth at Nestle, the world’s No. 2 provider behind Mars Inc., according to Euromonitor.

Other big players are upping the ante. Last year, General Mills inc. splurged $8 billion on Blue Buffalo Pet Products, while J.M. Smucker Co. bought Ainsworth Pet Nutrition for $1.9 billion and Amazon.com Inc. started Wag, its own brand of pet products. Each of them offers recipes aimed at the premium pet-food consumer, including grain-free formulations and proteins normally seen on fine-dining (and log cabin) menus, like venison and wild boar.

Pet-food producers are shifting strategy because of the increasing challenge of feeding the world’s growing populations of people and household animals. Livestock contributes an estimated 14.5 percent of human-caused greenhouse gases, according to the United Nations. Startups like The Honest Kitchen and Ollie, responding to pet-food recalls, misleading marketing and what they see as supply-chain opacity, tout the human-grade quality of their ingredients, prompting concerns that they’re taking food people could eat and putting it in dog bowls.

“With the trend toward feeding animals more human-quality foods, you’re going to see those pain points if those products are going to be needed for human food,” said Christy Slay, director of technical alignment at the Sustainability Consortium.

One solution is to feed pets those high-nutrient parts that aren’t palatable for humans, according to Tom Cumberlege, associate director of the Carbon Trust. RootLab pushes the envelope in this regard, embracing ingredients that might feature on a child’s recipe for witches’ brew — including cod heads.

The Honest Kitchen and Ollie say that while their ingredients are processed in facilities that make them fit for human consumption, some would be unlikely to end up on a person’s plate and might otherwise go to waste.

“Being human grade and being sustainable are not mutually exclusive,” a representative for the Honest Kitchen said.

To source the RootLab ingredients, Purina is getting creative. It worked with its cod supplier on a new processing system to rescue bits that otherwise would have gone overboard after the fish were caught for human consumption, allowing for near 100 percent use of the fish.

The company is also using cricket powder as a protein, following a 2013 UN report focused on edible insects as a solution to feeding the world’s growing population. O’Neil’s team asked Purina’s in-house chef to cook with it for them to help inspire recipe ideas. Convincing members of the team to dig in was not easy, he said. His Labrador, Mini, was less finicky.

“My dog loves it,” O’Neil said of the final product, a chicken, egg and cricket blend.

RootLab is currently limited to the Chicago area as the brand is still gauging consumer interest and fine-tuning its supply chain for the new ingredients. But already, it’s influencing the company’s other brands. Cod byproducts, for example, have made their way into Purina’s broadly distributed Beyond label.

In the pursuit of sustainability, Purina faces growing competition from around the world. In Finland, Dagsmark Petfood sells the country’s first locally sourced dry dog food. Canadians can buy from Champion PetFoods, which bills its ingredients as coming from local farmers, ranchers and fishermen.

Whether RootLab succeeds will depend largely on whether Chicagoans are willing to pay a premium for sustainable dog food — even if their pet enjoys it.

“Dogs and cats do not buy pet food; owners do,” said Marion Nestle, author of Pet Food Politics and a professor at New York University who’s unrelated to the food giant. “Will owners be willing to feed these things to their pet ‘children’? It will be interesting to find out.”