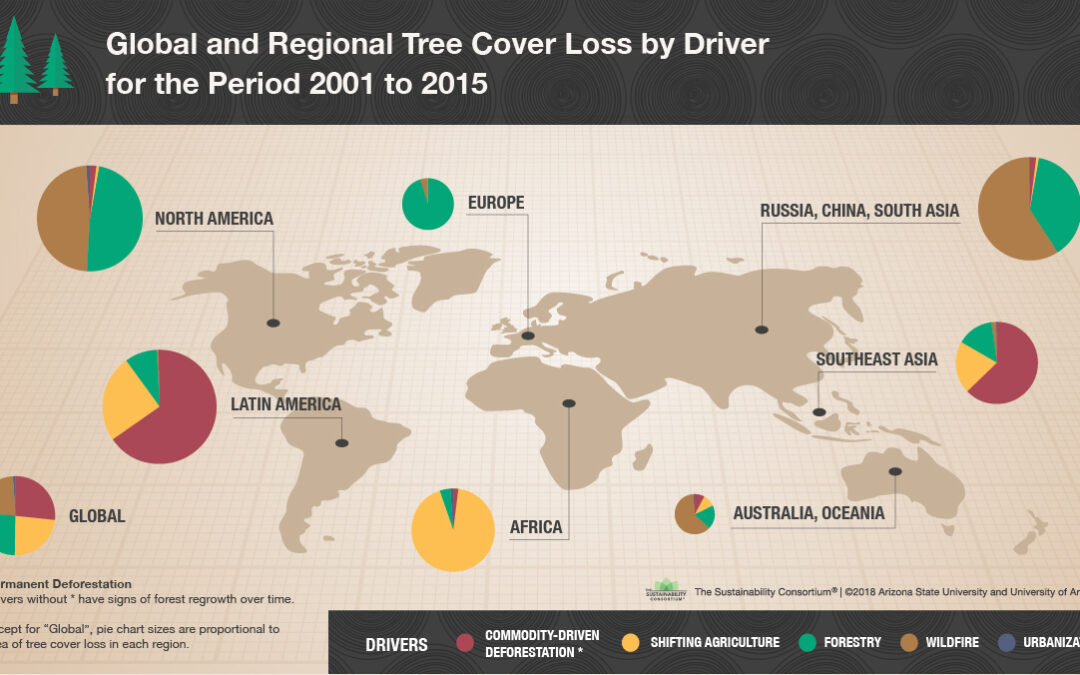 In person or in pictures – felled trees where a forest once stood can be alarming to witness. Whether you have viewed satellite images of deforestation in the Amazon or watched as trees are cut down on a local hillside, the response is often the same- we ask ourselves “why” and “should I be concerned”? Not all forest loss is created equal. There are many different reasons why forests are declining, some of them are natural and some of them are man-made. Educating yourself on the “whys” around forest loss will not only help you interpret what you see, but will help you decide what you can do about it and which organizations you can support.

We depend on forests not only for food, wood, fuel, and shelter, but also to help supply materials for the products we use every day. When it comes to deforestation, where do everyday people, companies, and governments need to focus efforts to eliminate deforestation? The Sustainability Consortium together with the World Resources Institute, and the University of Maryland set out to answer this question in our new study, released in Science. By training a computer model to identify distinctive patterns connected to human and natural disturbances in forests we were able to model why forests are lost. What resulted was a map of the 5 main reasons we are losing our forests.

Overall, we found nearly 27 percent of all forest loss — 31,000 square miles per year — is caused by deforestation that stems from the demand for food. Forest loss caused by the production of food will likely never regrow – these forests are lost forever. In other words, an area the size of Costa Rica was felled to grow commodity crops and graze cattle every year for the last 15 years. Globally, deforestation rates have not gone down, they’ve just switched from one continent to another. For example, deforestation rates have slowed in Brazil but we saw a large uptick in SE Asia. Basically, the human demand for commodities such as soy, beef, palm oil, and other crops has driven the large-scale razing of forests around the world at a consistent rate of one Costa Rica equivalent per year.

The next largest driver of forest loss worldwide is forestry at 26 percent to supply paper and wood products. If you have ever seen a forest that has been cleared, it can cause alarm to see a large area of bare ground where trees once stood. Yet, our study shows that forest loss due to the forestry industry will regrow, meaning that these forests will eventually be forests again. Certifications are relied upon heavily to ensure sustainable forest management but most forestry practices and suppliers are not certified leaving the majority of the world’s harvested forests vulnerable to poor management.

The third largest driver, shifting agriculture or what some call “slash and burn” is 24 percent. The pattern of shifting agriculture shows small to medium sized clearings that are replaced with crops and later abandoned. Over time, these areas will regrow trees and may end up being very different from what was there originally. This pattern is associated with farming to meet local demand for food and isn’t associated with the large, permanent farms we see in agriculture used to produce consumer goods on a global scale.

Although fire can be destructive to homes for both humans and other animals, forest fires are usually a natural part of forest growth. We looked at the patterns of wildfire around the world and were surprised to find that 23 percent of global forest loss was due to wildfire. These fires mostly occurred in northern latitudes and are often due to lightning strikes and may be intensifying due to climate change.

Many local and state efforts focus on low-impact development and urban planning, yet the urbanization category accounts for less than 1 percent of all forest loss. Even in developing areas of China and Africa the deforestation associated with cities is dwarfed in comparison to commodity-driven agriculture. Simply put, deforestation from urbanization is the least concerning category for overall impact. Urban development has other effects on our planet and affects the places where people live and for that reason should not be discounted.