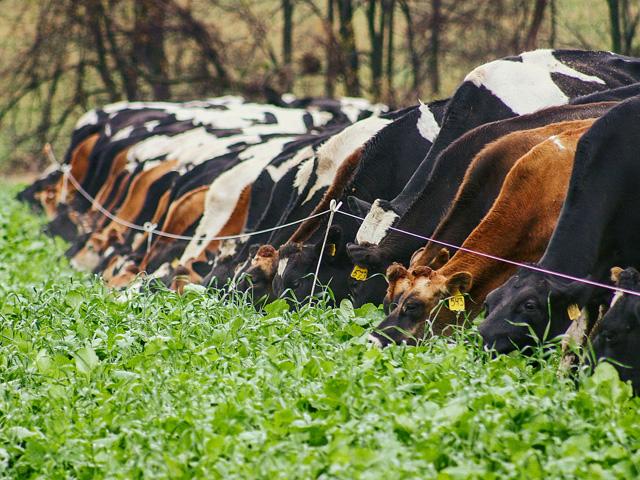 WASHINGTON (DTN) — After pitching a climate-smart pilot program last spring that was expected to cost $1 billion, USDA on Wednesday rolled out up to $2.8 billion in grants under the Partnership for Climate-Smart Commodities with expectations that more funding will be released before the end of the year.

Fully implemented, the 70 projects are expected to reach more than 50,000 farmers in all 50 states and Puerto Rico and encompass as many as 25 million acres with practices such as cover crops, no-till and nutrient management. The projects will offer technical help and payments to farmers who adopt practices that lower greenhouse gas emissions in their operations and sequester carbon in the soil.

Companies, organizations and universities tied to these 70 projects are required to provide both technical and financial assistance to producers who enroll in these projects on a voluntary basis. They must also develop and promote markets for the commodities derived from these climate-smart practices.

As he has repeatedly mentioned in the past, Vilsack said he believes the pilot projects will show that agriculture can play a role in combatting climate change. U.S. agriculture, he said, will have a leg up on other countries focusing on sustainability in the supply chains.

“We all recognize that agriculture needs to be part of the solution, not part of the problem,” Vilsack said. He added, “This will allow the United States agriculture and forestry industry to take a leadership role internationally.”

If fully realized, the agricultural and forestry projects will sequester the equivalent of more than 50 million metric tons of carbon dioxide. USDA stated that’s roughly akin to removing more than 10 million gasoline-powered passenger vehicles from the road for one year.

Along with the $2.8 billion in funding from USDA, Vilsack said the projects will also include roughly $1.4 billion from the private-sector partners involved.

Applying those dollar figures, the 70 projects collectively would spend $4.2 billion. If they reach 50 million metric tons sequestered, that will put the costs at $84 per metric ton. That’s more than double what some of the top carbon credit companies are offering farmers in the voluntary carbon offset market.

When USDA put out the notice for the pilot projects last spring, the department received 450 applications for the large tranche of funds — projects ranging from $5 million to $100 million in funding proposals. USDA received another 650 applications for a smaller grant program that will fund projects from $250,000 to just under $5 million.

“Well, suffice to say, the $1 billion that was set aside — given the demands and given the interest that has been expressed by agriculture and forestry — I asked the staff at USDA to take a look at ways in which we can increase our commitment to those departments,” Vilsack said.

USDA was approved for another $2.5 billion, bumping up the full program to as much as $3.5 billion that will be used from the Commodity Credit Corp. (CCC) fund over the next five years. The project funding will likely receive a barrage of criticism from congressional Republicans who have repeatedly questioned and condemned USDA using CCC funds for climate programs.

Despite tapping the fund for up to five years of commitments, Vilsack told reporters on Tuesday that CCC will fully fund its commodity payments under the farm bill and close out the 2022 fiscal year in a couple of weeks with “several billion dollars left over after all of that.” He added, “There is plenty of latitude left in the CCC.”

Once the Biden administration took office, Vilsack noted discussion on how USDA should focus on reducing greenhouse gases in agriculture and sequestering carbon leaned heavily on advice from farm groups. He pointed to recommendations from the 80 organizations that make up the Food and Agriculture Climate Alliance (FACA), which specifically proposed USDA develop pilot projects.

“We basically followed the prescription or the outline they provided to a T,” he said.

FACA “commended” USDA for its selection of projects and using the coalition’s recommendations “as a guidepost” in developing the projects. FACA noted USDA’s “meaningful inclusion of early adopters and small and underserved producers in the program. The coalition added, “The Alliance is pleased that the projects selected recognize differences between regions, farm size and forest type, and diversity of production in the United States.”

Regarding quantifying the results, Vilsack said each project will be responsible for periodic reporting of information to USDA as well as holding frequent meetings over the progress. That information should then be made public, the secretary said.

“Everyone who participates agrees to be part of a network that will report data and information that will be provided to USDA,” he said. “We will be reporting on a regular basis” to the public and Congress.

DTN is part of one of the projects being funded, “Farmers for Soil Health Climate-Smart Commodities Partnership,” which will receive up to $95 million to “accelerate long-term cover crop adoption” by creating a platform to “quantify, verify, and facilitate the sale of ecosystem benefits, creating a marketplace to generate demand for climate-smart commodities.” The partnership will involve farmers in at least 19 states who grow corn and soybeans. The National Corn Growers, United Soybean Board, National Pork Board, National Center for Appropriate Technology, National Association of Conservation Districts, Soil Health Institute, University of Missouri, Sustainability Consortium, DTN and The Walton Family Foundation are involved. The project is led by the National Fish & Wildlife Foundation.

Among a few highlights in other projects:

— Dairy Farmers of America will look to create a “low-carbon dairy opportunity” through its projects to lower dairy emissions.

— The Meridian Institute will look to streamline field data collection to help quantify emission reductions on farms that produce value-added specialty crops, as well as row crops, or sell directly to consumers.

— South Dakota State University will lead a project for beef and bison producers to develop grazing strategies and land management practices with a goal to expand market demand for climate-smart beef or bison products.

The full list of the 70 projects can be found here: https://www.usda.gov/….

Chris Clayton can be reached at Chris.Clayton@dtn.com